The Mayor and Mayoress of Charnwood, Councillors A Stott and Mrs E Stott have visited Quorn to officially unveil the village’s Millennium Map. Quorndon’s Millennium history board has taken time to design and bring to fruition. It was one of the later ideas of 1999.

Don Wix (shown in lower photo) originated the idea and carried through the process to its conclusion. Brian Williams helped County Hall Central Design Department with the graphics and Ian Keil aided the work on the history notes. The project has been helped by the Millennium Committee, the Parish Council and by a Millennium grant from Charnwood Borough Council.

The history map is surrounded by many sketches and notes depicting Quorn’s phases of development including the reason for its name the quern or quornstone which was a granite handmill to grind corn in ancient times.

The village had many sides to its history. These are shown through the building of the early churches, the stagecoach era, bridgebuilding, the Quorn hunt, the old mills, the early hosiery industry, canal building, railways, floods and many more old landmarks.

Another map on the reverse is a large up-to-date village street map. It seems fitting that this new project is sited at Quorn Cross in the centre of the village. 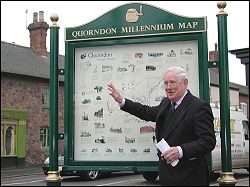 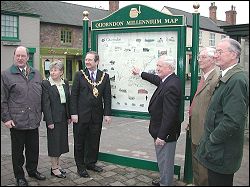