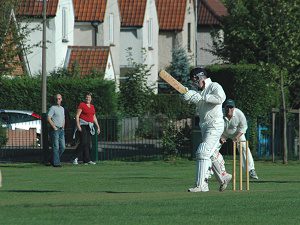 After years of fighting to save Quorn’s cricket pitch (Cave’s Field) from residential development, the Parish Council eventually purchased the land for the village in 2002 and has signed a long lease with the Cricket Club for its continued use.

The battle could not have been won without the overwhelming support of the village and the many others who helped with their time and encouragement, usually unpaid.

Unfortunately it is impossible to write letters of thanks to everybody who helped or contributed. However the Cave’s Field Action Committee, the Cricket Club and the Parish Council would like to thank everyone involved, in particular the many villagers who donated their time or money or both. However small the contribution, it helped, and this vital open space has been saved because of that help.

Caves Field Action Committee, who took up the cause right from the start, raised nearly £9000, mostly from donations. The money was used for legal fees and expenses, eventually facilitating a settlement by the interested parties and enabling the land to be bought by the Parish Council.

The Parish Council wishes to improve the ground as a recreational facility for the village and various proposals are to be explored.

George Farnham, Cave’s Field’s original benefactor, would be rightly proud of the efforts to maintain his gift to the village he loved. Thank you all again.