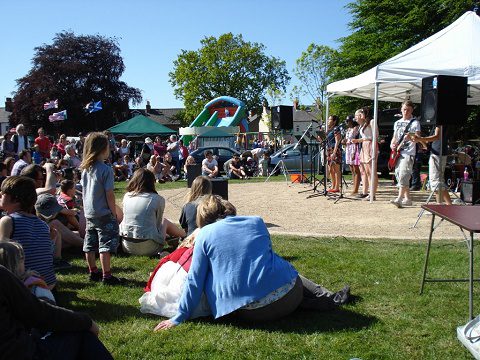 Stafford Orchard was gifted to the people of Quorn in 1922, although the use of part of it as a village green dates back to 1588.

In March 2009 the National Heritage and Big Lottery Funds announced that the volunteer group working on a project to refurbish Stafford Orchard and its amenities, and the old listed gaol at the park entrance, had been awarded a grant of £645,500 under the Parks for People programme.

“This is a wonderful result. It is a remarkable achievement by a small parish council in a rural village. It is also a proud moment for the Quorn community and particularly for the park team – all volunteers – who have committed thousands of hours of effort to the project over a three year period, and for the community support and enthusiasm which kept them going. I am thrilled for them, and delighted that Stafford Orchard park will now get the facelift it so desperately needs.”

“This committed local group has worked closely with our development team to develop this wonderful project. Our green spaces are a precious resource, but time takes its toll and many parks need a helping hand to be restored to former glory. Today’s news will do just that, giving a boost to the transformational plans for Stafford Orchard so that local communities can enjoy this beautiful green space for generations to come.”

Reconstruction of the park took place in 2010 and was officially reopened on May Day 2011 by the Lady Gretton, Lord Lieutenant of Leicestershire.

The refurbishment, which took over five years to bring to fruition by village volunteers, has revitalised a tired, underused open space in the centre of Quorn. Thanks to the Lottery funding and financial support from Charnwood Borough Council and Quorn Parish Council, this volunteer driven and managed project has completely transformed the park, with new play experiences for young children and teenagers, an enhanced landscape and increased biodiversity in the park with new trees, native shrubs, thousands of spring bulbs and a sensory garden, natural habitats in the park’s brook area, new seating, interpretation panels, and improved entrances and access for all abilities. The old gaol at the entrance (a Grade II listed building) has also been restored and a Park Services Building and toilets reconstructed.

The United States 82nd Airborne Division, a regiment of which was stationed in Quorn in World War II, is commemorated in the park with a plaque on a stone from the church of Nijmegen in Holland and by an avenue of lime trees planted in 1952. The memorial has been refurbished and given greater prominence. It was re-dedicated at a service in the park in the presence of members of the present-day US 82nd Airborne Division on 17th September 2012.

The whole community was involved in drawing together the plans for the restoration and redevelopment of their park; two major village consultations refined the plans; local schools and toddler groups helped select the under 8’s play equipment; Rawlins Community College students and teachers carried out surveys to help design the over eight’s play areas; another group of young people worked on the skate park; volunteers planted 15,000 spring bulbs and designed and planted a peaceful formal garden.

A census of park users taken in the summer of 2009 and repeated on similar days in 2012 after the refurbishment, revealed that use of the park had doubled, and all the targets agreed with the Heritage Lottery Fund for the general audience, families, the elderly and the disabled had all been significantly exceeded.