A project to restructure The Cross in Quorn followed hard on the heels of completion of the Soar Valley A6 bypass in 1996, which relieved Quorn of much of its through-traffic, particularly the damaging heavy vehicles.

The design was undertaken by the Leicestershire County Council Highways Dept with a lot of input from Quorn Parish Council. The area is now paved, new street furniture installed, an oak tree planted and a bus shelter constructed which mirrors the style of the listed building behind it. Subsequently, circular planters built from bricks salvaged from the demolished Victorian Wright’s mill chimney have been introduced, and a new village plan and street name origins sign is soon to be erected as a millennium project.

It is a delight to see people sitting in the Cross outside the pubs and restaurants which surround it enjoying the evening summer sunshine and the newly planted War Memorial Garden. 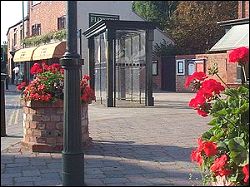